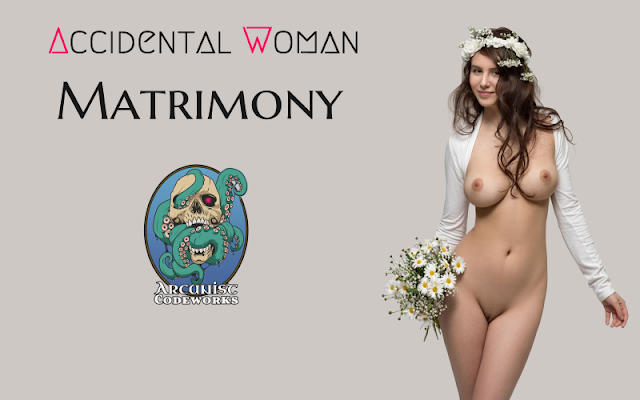 Before I get into the details of the poll results, I wanted to share a little good news. Because you guys are awesome and support AW development with your money, I'm always looking for ways to put that money to effective use for AW. Our income and patrons have been steadily growing, which has opened up some new opportunities for us. First is that we're bringing a junior developer onto the team, which will help us get more done each month. We'll be doing a trial this first month, but I have high hopes.

The one thing that's really important to me as the person who started this project is making sure that anyone I hire or pay for freelance work can make a good respectable wage. Being able to offer someone an interesting job with good pay is a great feeling, and it's all thanks to your support that it's possible. We'll all keep working together to make more perverted stuff for you!

I'm really glad that I did the marriage poll because the results weren't what I was expecting at all. Besty thought most people were going to pick "A", the skip marriage option. I was leaning more towards "B", which turned out to be the least popular, lol. We want to take the game in a direction you all will enjoy, so it really is good that we were able to learn more about what you want! 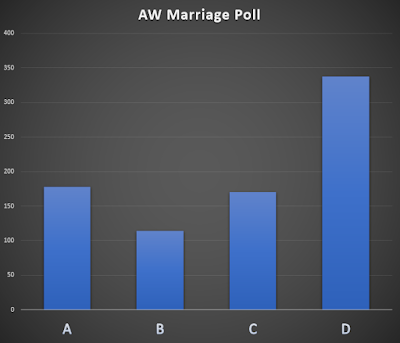 A) Avoid marriage, B) Wedding Ceremony, C) Married Life, D) Everything
These results have been adjusted according to voter pledge tier. 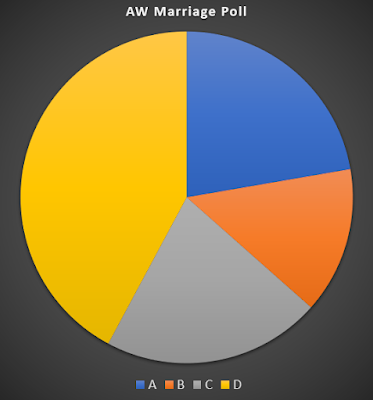 As you can see, every option had at least some support. The winner was option D for everything, with 42% of the vote. Combining categories a bit, we see that 63% view married life as being important, and 56% view the wedding ceremony as being important. 22% of the voters wanted to avoid marriage altogether and focus on other content.

With this poll, we also got a lot of comment feedback as well on Patreon, SubscribeStar, and in the Discord. It seems that a lot of people are concerned about quality and time, which is a legitimate issue. Of course, we want to complete things to the same level of detail as other areas of the game. That takes time, and time is a limited commodity, which is part of the reason for the poll: to focus our efforts. Most of the comments seemed to suggest that they want marriage content, but they don't want it done halfway if there isn't enough time.

We've been working towards meeting the original 1.0 completion deadline that I set out way back when I started development. That deadline is the end of 2020, which is going to come up fast. Most of what we can cut at this point to make more room for expanded marriage is going to be pretty noticeable, and I'm not sure it'd be right decision to do that and still claim we reached 1.0. I want the 1.0 release to be a fully playable game, after all, and not just an in-progress build that happens to be called 1.0. :D

I think the best option would probably be to extend the deadline and give ourselves more time to reach 1.0 while adding expanded marriage and not cutting back on things. Ultimately, I think that having a result that you're all happy with is more important than meeting that original timeline. However, that's a big decision, and one I think you guys should be a part of. There are some other options we could try as well, such as not including marriage in 1.0 and treating it as the subject of a focused expansion.

Be sure to check on Patreon or SubscribeStar for the poll dedicated to this decision!

What is this expansion business?

We've had a lot of requests to add mechanics and content that weren't in the plans for 1.0, and that would take too much work to add. We've been trying to limit scope creep and stick to the schedule, so we just can't add those things as much as we'd like to. Letting the player character be a futa is a perfect example; while we've laid out the groundwork in our character data design, letting the player be a futa will require a lot of work.

So our plan for these sorts of ideas was to create expansions. Once we have a nice solid 1.0 game that is perfectly playable by itself, we'd let all of you decide what sort of content expansions you'd like via polls. This way we wouldn't be in a sort of never-ending development status like some games out there. That isn't always a bad thing, of course, but I've always felt like having solid boundaries upfront was the best way to take AW.

The expansions themselves would have a limited development period measured in months to accomplish a specific expansion objective, and we'd share how long adding different things would take when having a vote on what expansion content to pursue. We may also change the way our releases work and other things, but that's something we'll decide together when the time comes.

I think the expansion period is also a good way for you guys to say "okay, that's enough work on AW." As we plan to have that as an option each time we select a content expansion to work on. Eventually, there will be a time when it makes more sense for us to move forward with a new exciting project rather than add on to AW, and this will help us discover when that point arrives.

We won't talk heavily about expansions until we're closer to reaching our 1.0 goal, but I'll share some of the ideas we've had so far. You're more than welcome to suggest your own ideas as well, now or in the future.


Whew! This has been a huge update, so I'll call it for now.

Thanks as always for your support! 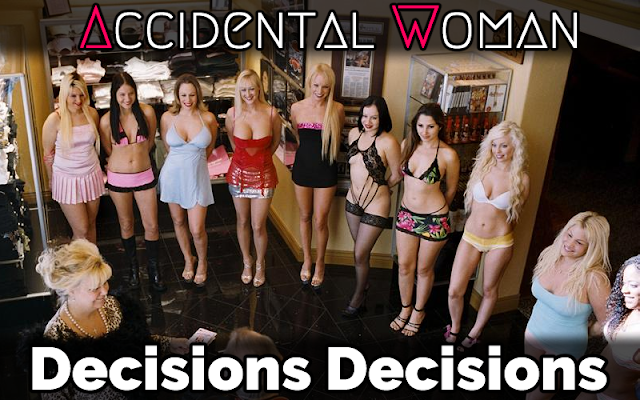