Did you know that the word intercourse originally had nothing to do with sex? It actually just means communication or dealings between individuals or groups. But because of general prudishness, we ended up with "sexual intercourse" as a euphemism for sex. Now if you asked someone "Hey, did you have intercourse with Amy?" it means "Did you fuck Amy?" instead of the original meaning "Did you talk to Amy?".

Well, this release has a lot of stuff related to sex, and a lot of stuff related to talking, so the release name might actually make sense for once! There have been some upgrades to the sex system, including the AI and even adding a new scissoring position for lesbian scenes. We've also added NPCs initiating interaction with the player, instead of leaving it up to the player to start an interaction with an NPC in the same location. So... talking and fucking.

We also spent a lot of time working on bug fixes this month, and our bug count should be significantly reduced. If not, you have my permission to turn Besty into Shashliki (Russian BBQ). As usual, we've thrown in some new content for you to enjoy as well.

From all of us at Arcanist: Thanks for your support, and we hope you enjoy the game! 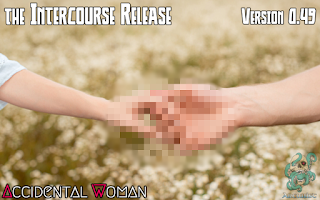 So now your can burst out of your bra/shirt if you hit up the Mammarex or Bovinex. The idea was too fun to skip for the name of this relea...