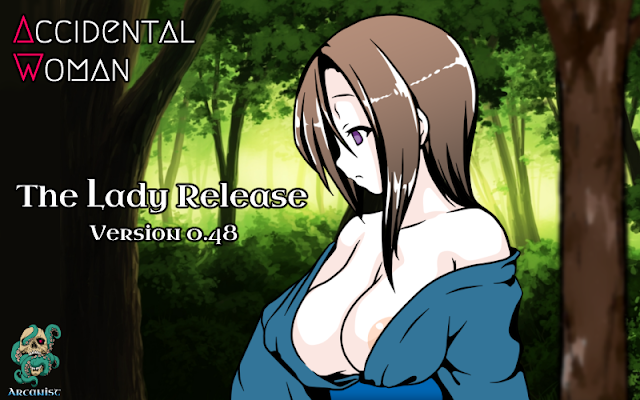 This release was scheduled a little later than usual, mostly because of the Independence Day holiday and a short vacation to visit family over the holiday weekend. That said, this release has got a lot of stuff in it. We're transitioned from marriage to starting the process of polishing and completing things as we move toward the 1.0 release. This is a bit of an unusual release because there's such a large variety of different things in it...

Without a major theme to focus on, probably the biggest item is the Lady of the Woods event series. I had this idea a long time ago (it's why there is a woods area near the Hoden Springs), so it's great to actually see it implemented. In addition to being rather large with a lot of erotic writing and a ton of new art, it also has some useful side benefits for players who want to get their mental stats under control. You only get so many visits to the lady though before you'll want to stay with her forever... (Which of course has a fun "bad" end scene!)

Next month, we'll continue to work on improving various facets of the game, and we're also going to start back on the main story. Getting those extra sex options in, making further AI improvements, tweaking dating behavior, getting more spontaneous NPC interactions, etc. As usual, some fun ideas will probably sneak their way in too!

Thank you everyone for your support! It really means a lot to us. We're going to keep working to make AW the best game we possibly can, and remember, you can always stop by discord to give us your feedback! We may be busy/away at the time you visit, but I promise all three of us read each and every suggestion you send us!

We hope you enjoy the release!

Hello everyone! It's been a while since I've done a proper blog post since it felt like things were mostly on the rails and there ...